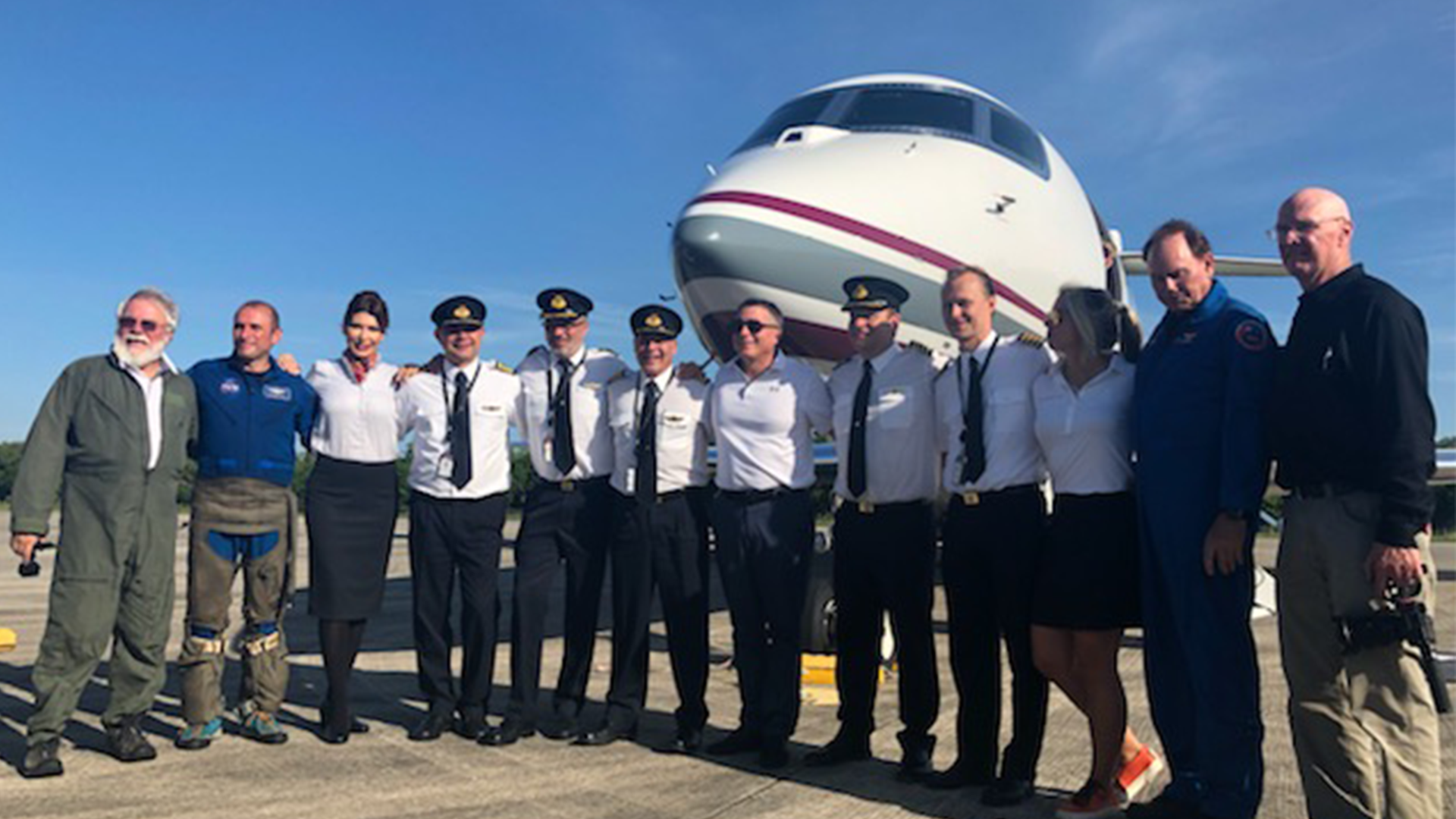 Cape Canaveral, Florida / 11 July 2019 – Executives from Satcom Direct, the business aviation solutions provider, proudly welcomed the One More Orbit team’s Gulfstream G650ER as it landed at the Space Florida Launch and Landing Facility, formerly known as the Shuttle Landing Facility, today to complete its record-breaking attempt to complete the fastest aerial circumnavigation of the earth via both geographical poles. The flight, which took 46 hours 39 minutes and 38 seconds, (to be officially confirmed) knocked some eight hours off the existing record and was followed online around the world by aviation enthusiasts logging into the live stream broadcasting the voyage.

The live stream, as well as connectivity and flight deck communications support, were supplied by SD combining its powerful connectivity and security infrastructure with the Global Xpress network from satellite partner Inmarsat. The full ecosystem of SD solutions kept crew, ground control, support teams, the documentary production unit and enthusiastic social media supporters connected for the flight duration, using more than 33GB of data throughout the mission.

To match the needs of the fastest-flight endeavor, the SD team installed equipment and services to deliver the fastest broadband inflight connectivity available for private aviation. The One More Orbit team were connected across the network service area with the SD state-of-the-art equipment, including the Satcom Direct Router (SDR®) and SD Operating System, supporting multiple real-time streaming and communication capabilities.

The first of a kind set-up, which had to support the mission team and a documentary filming team, as well as the live stream, underwent rigorous testing ahead of the ambitious attempt. SD was committed to ensuring the One More Orbit team had the resources needed to successfully complete their goal of honoring the brave Apollo 11 astronauts. The communications equipment was tested in the UK at SD’s Farnborough facility with Inmarsat and the film production crew. Testing was repeated in Savannah at the Gulfstream Service Center and was put through its paces again on-wing ahead of take off at Space Florida Launch and Landing Facility.

SD’s flight operations software platform, SD Pro®, kept the aircraft synchronized with ground operations and enabled crew and mission control to exchange valuable flight data to improve operational efficiency, which was essential for successfully beating the existing record. It also enabled live flight tracking which was publicly accessible through the One More Orbit website for supporters to watch completion of every one of the 22,422 nautical miles of the journey.

The high-profile event required high-level cybersecurity which SD delivered through its SD Threat Monitoring service. Real time detection, identification and mitigation of any attempted cyber-threat was supported by the SD network infrastructure, the SD Data Center and worldwide Points of Presence (POPS), ensuring a secure voyage for data and crew.

“We are thrilled to have been a part of this inspiring adventure which pays homage to our great Apollo 11 astronauts who boldly took that momentous flight to the moon fifty years ago. We wholeheartedly congratulate the One More Orbit crew and mission team for successfully completing this incredible record attempt. It highlights that visions can be made reality and we are privileged to have played a part in making modern-day history,” said Jim Jensen, SD Founder and CEO. “We pride ourselves on being at the leading edge of aviation connectivity, as the only dedicated provider in the business aviation sector. The One More Orbit mission aligns with our company philosophy of always pushing boundaries, looking for new solutions and delivering effective connectivity, as we take on the challenges and make the seemingly impossible, possible. Business jet users will only benefit from this adventure as we have learned a few things along the way. Not only has this set a new world record, it has raised the bar for business aviation connectivity expectations.”

About Satcom Direct:
Satcom Direct (SD) and its companies provide global connectivity solutions for business and general aviation, military, government, and head of state aircraft. The company also provides land mobile services to areas with connectivity limitations. Since 1997, SD has worked to advance the technology of global connectivity, being first to market with many new capabilities in communications technology. SD’s industry-leading connectivity solutions are complemented by their divisional capabilities, including SD Avionics cabin router systems and SD flight operations software. The company’s next generation of services help to synchronize the aircraft with the flight department and connect the entire flight operation. SD’s technologies provide an integrated connectivity platform like nothing else in the industry.

We offer a completely fault-tolerant data center with #redundancy for every component. So, what does that look like? Multiple layers of physical security, multiple power supplies, 8 inch thick ceilings, & 100% uptime SLA. Your digital #data has never been so physically #secure

We are #grateful for our customers, partners, and world-class staff! #HappyThanksgiving

Competition makes us faster, but its collaboration that makes us better. SD's International team is comprised of some of the best in the industry #collaborate #innovate #excel

Keeping You Connected. ⚓🛰️ For a quarter ce

Proud to be partnered with @inmarsatglobal governm

At Satcom Direct, we work hard and play hard and w

Voted Top 25 Places To Live: Melbourne, FL by @US-

Come visit us at the #TechExpo on Tuesday, 28th Ju

Check out the @SatcomDirect Jump Kit which utilize

Please join our very own, Brian Roos for #CJIAsia

We had a great first day at #WarriorEast. Visit us

Our Ottawa team had a great time watching the new

Come visit us at #WarriorEast from June 22-23 at b

SD Cabin Marine is now available on the Apple App

Make sure to visit us at the 2nd Annual National C

Come visit us at the 2nd Annual National Captain R

Satcom DirectJuly 28, 2022 at 2:08pm
Best in Class support doesn’t come easily. 🥇 It takes everyone putting the customer first and that’s exactly what happened at a recent event. After a long day of networking, the team was ready to relax but a call came from a customer attending the event - our team travelled to the airport and at 8pm, performed an Ops check, verified connectivity and provided hands-on training for an anxious crew. #CustomerService #Support #BestInClass

Satcom DirectJuly 26, 2022 at 3:10pm
Keeping You Connected. ⚓🛰️ For a quarter century, Satcom Direct has been the pinnacle of service for business aviation in-flight connectivity. Now, SD Marine brings the tried-and-true technologies and services of the stratosphere to the open ocean. Learn More: https://bit.ly/3J6BXdW #Connectivity #Solutions

Satcom DirectJuly 21, 2022 at 1:31pm
At Satcom Direct, we believe time is precious, and so do our customers. In the air, on the sea, and in remote lands, our technology connects and, at times, protects our customers when seconds matter most. ✈️ 🛰️ #PlaneSimple #Connectivity #InFlight #Satellite #DataCenter