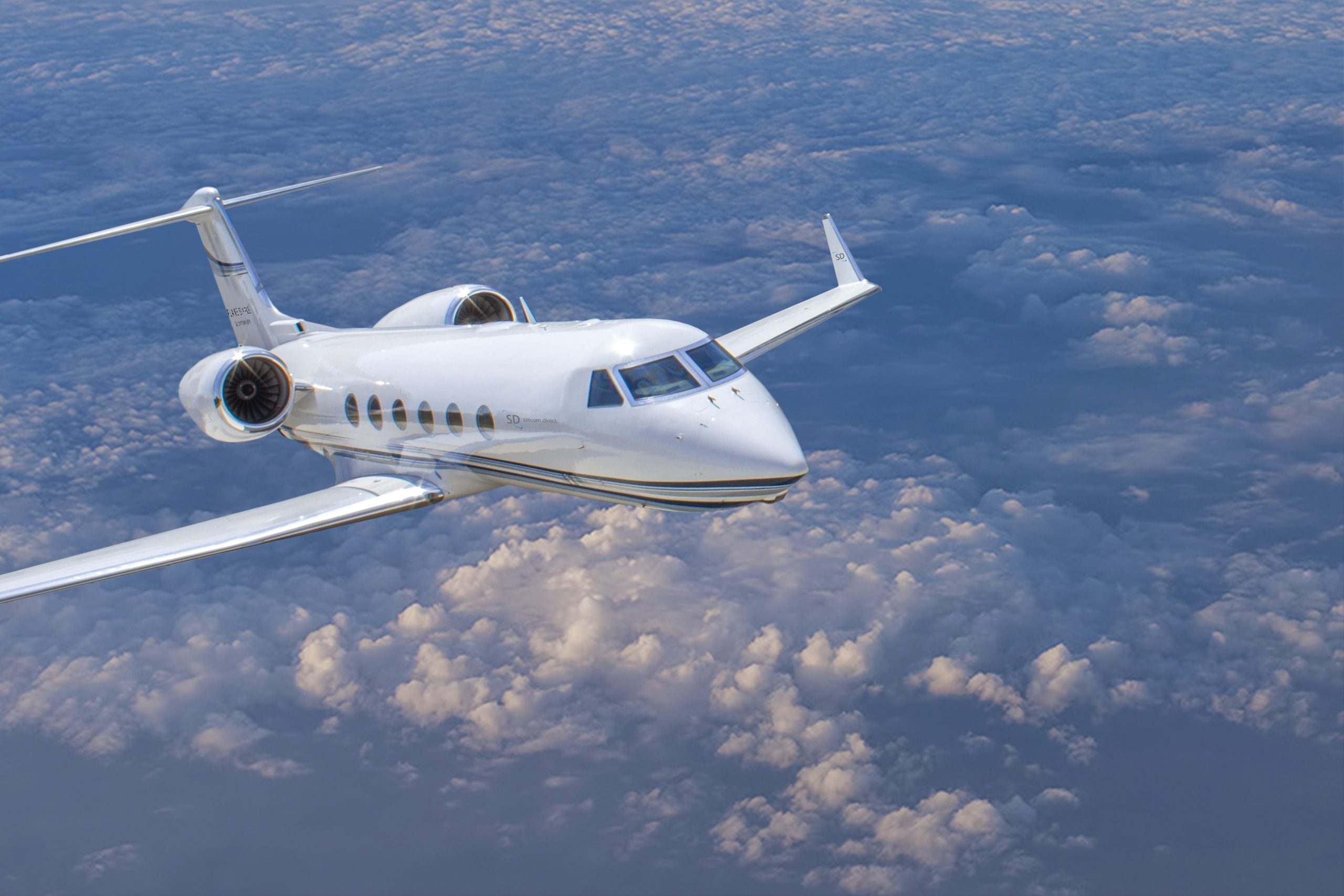 Melbourne, FL. / 4 October 2021 – Satcom Direct (SD) has confirmed successful functioning of the Plane Simple™ Antenna System during a series of transatlantic and European validation flights. In more than sixteen hours of testing amassed during a three-day mission, the tail-mounted, Ku-band Plane Simple Antenna System demonstrated its compatibility with the Intelsat FlexExec satellite network. Seamless data transmission was supported by the SD ecosystem of hardware, software, and terrestrial infrastructure, as it delivered consistent data streaming across multiple devices.

The SD Gulfstream G350 flight, confirmed the reliability of the new hardware, which has been developed specifically for business aviation. Constant data transmission verified the terminal’s functionality across the Intelsat FlexExec network, stressed the system, and proved its capabilities across a range of aerial dynamics. The flight transitioned between three satellites on the Intelsat network as the aircraft flew along the east coast of the USA, across the North Atlantic, and on to Ireland, before returning back to base in Melbourne, FL.

The beam transmission was flawless as more than 29 GB of data was transmitted during the flight trials across Intelsat’s multi-layered, redundant, high-throughput satellite network. The SDR® Gateway router supported Wi-Fi distribution to numerous personal electronic devices in the cabin, enabling multiple streaming applications, video conferencing calls, and Live-TV, to be simultaneously active.

“This heralds a new era for business aviation as it confirms SD has successfully developed a powerful hardware system that supports unparalleled connectivity services from a single source supplier. Contacting just one company for all connectivity needs streamlines the ownership experience, enhances customer support, and demystifies the complexity of aviation connectivity,” says President of Satcom Direct Business Aviation, Chris Moore. “The results prove that SD can support high-definition data streams for numerous on-board users concurrently and demonstrates that we remain committed to optimizing the possibilities delivered by the digitization of aviation.”

The Plane Simple Antenna System delivers a number of firsts to the business aviation sector. It consists of only two LRUs, an antenna and a modem, both of which are easy to access, enabling seamless upgrade paths and maintenance. The modem is positioned in the unpressurized part of the aircraft which also returns valuable stowage space to the passenger and crew.
SD is now working on generating commercial Supplemental Type Certificates to support Plane Simple installations. It is anticipated the first will be for Falcon 2000 owners, with others to follow by the end of the year to support business, military, and government aviation customers.

The tail-mounted Plane Simple Ku-band antenna is the first in a series being developed by SD in partnership with Germany-based QEST Quantenelektronische Systeme GmbH, a worldwide market leader in innovative aeronautical antennas. Once activated it will support the Intelsat FlexExec Ku-band service, which has been designed as the only airtime service dedicated exclusively for business aviation.

Satcom Direct (SD) is founded on a core belief of the value of time and to maximize it, the company mobilizes the most cutting-edge technologies to enable connection, wherever you might be.

SD World Headquarters is located in the heart of the Space Coast in Melbourne, Florida, with 14 additional locations in 11 countries including UK, UAE, Switzerland, Singapore, Australia, Russia, and Brazil plus a hardware development and manufacturing base in Ottawa, Canada.

#SatcomDirect Chief Pilot, Dallas Shoeneman, recounts his #businessaviation journey and how the industry has evolved beyond a “stick and rudder” operation to become a data-centric, #connectivity asset #SDpro https://bit.ly/33T1Mxq

We are thrilled to announce Kevin Brown as the #CwC2022 Keynote Speaker! Kevin’s business acumen and leadership experience transforms audiences by expanding their vision, developing their potential, and growing their results #cantmiss #success #growth @HeroSpeaker

Our SD Brazil office is celebrating its 10 year anniversary today!

This year, Satcom Direct will celebrate 25 years of Innovation! As we take time to reflect on our journey and look towards the future, join us on social as we share #25FactsAboutSD from now until June 2022.

We are thrilled to announce Kevin Brown as the #cw

Thank you to our customers, partners and dedicated

Wishing you and your family a wonderful holiday se

In 2022, we will be celebrating our 25th anniversa

Satcom Direct was founded on customer service. Our

We want to take this opportunity to express our si

Join us for the 17th Annual Connecting with Custom

Satcom DirectJanuary 24, 2022 at 4:08pm
#SatcomDirect Chief Pilot, Dallas Shoeneman, recounts his #businessaviation journey and how the industry has evolved beyond a “stick and rudder” operation to become a data-centric, #connectivity asset #SDpro https://bit.ly/33T1Mxq

Satcom DirectJanuary 19, 2022 at 7:10pm
We are thrilled to announce Kevin Brown as the #CwC2022 Keynote Speaker! Kevin’s business acumen and leadership experience transforms audiences by expanding their vision, developing their potential, and growing their results #cantmiss #success #growth

Our SD Brasil office is celebrating its 10 year anniversary today!