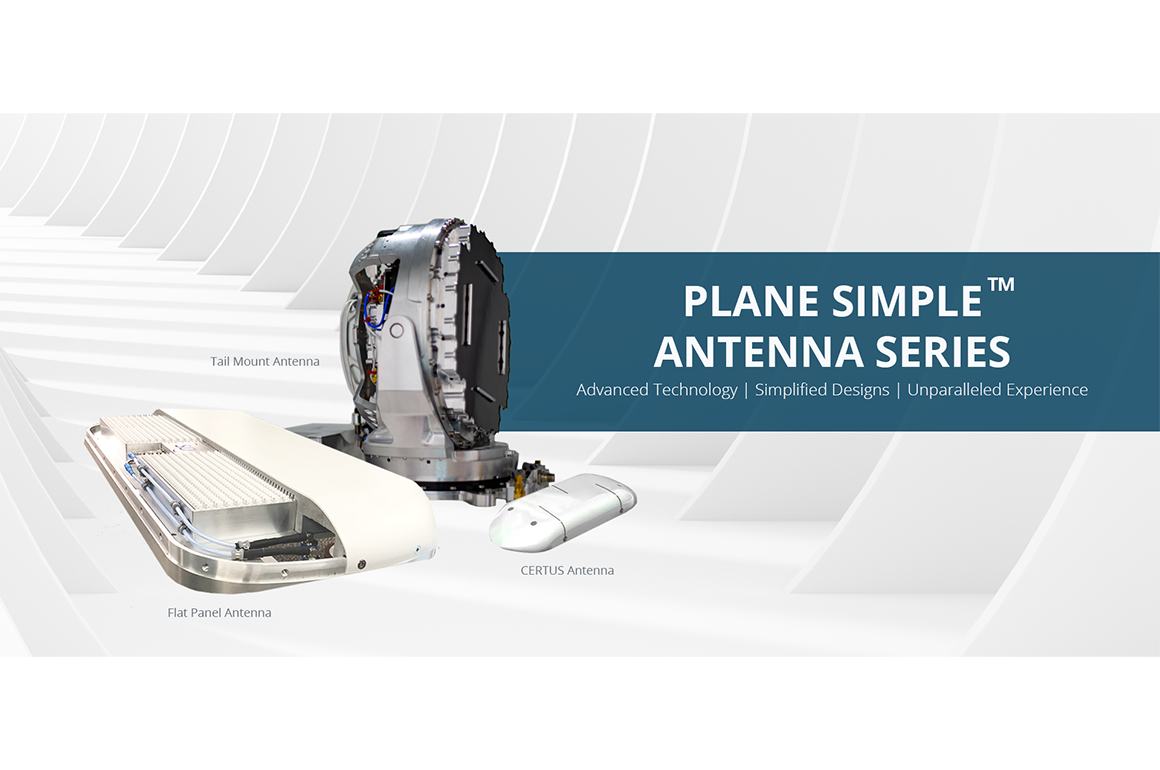 Our commitment to validating every service and product to ensure best quality before showcasing it to our customers is unwavering. As we continue development of our Plane Simple™ antenna systems we are excited to share an update on progress as we transition from the research and development phase to intensive testing.

Replicating the airborne environment for our equipment is key to understanding the full performance capabilities, and how they operate within a dynamic environment. Using a tried and tested methodology SD is emulating pitch, roll and yaw motions of an aircraft using a customized mobile platform to confirm its ability to accurately point to the network’s satellite in a dynamic environment. The antenna system is fixed to a modified heavy duty truck, outfitted with aircraft interconnect cabling including an aircraft inertial reference system. The constantly changing flying environment is imitated by the truck as our test team subjects the antenna system to dynamic motion scenarios even more extreme than those realized in flight (tight turns, figure eights, and humps and bumps over unpaved surfaces). The robust trials are designed to stretch the limits of the system as it effectively emulates the airborne experience while providing empirical feedback about its capabilities. 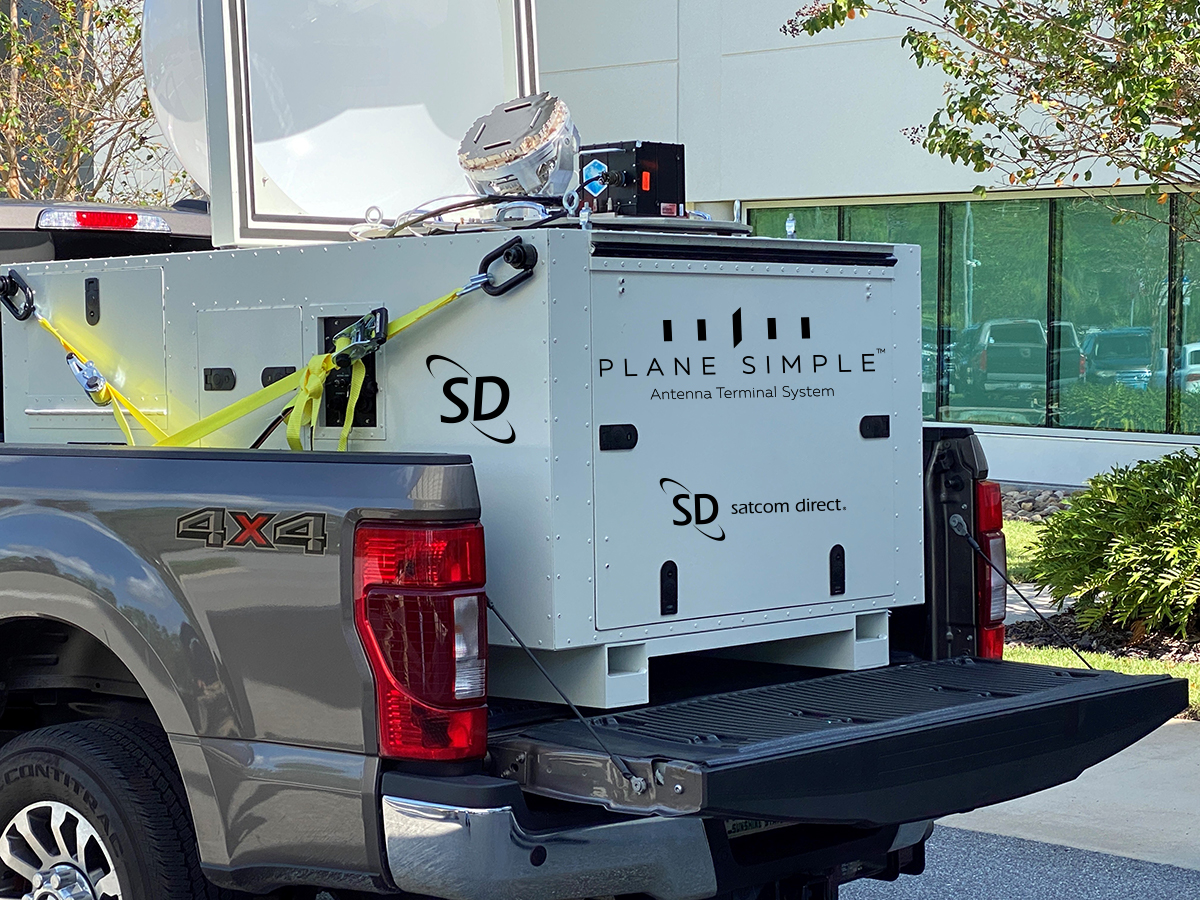 To support end-to-end connectivity and validate its best-in-class performance, the antenna system must also successfully demonstrate the transmit and receive capabilities. To test this element, SD Plane Simple test antennas are fixed to the roofs of our offices around the globe. Rather than focus on dynamics, these fixed testing sites establish the speed of data rates, the ability to switch between satellites and the antenna’s effectiveness at maintaining communications protocols with the network. 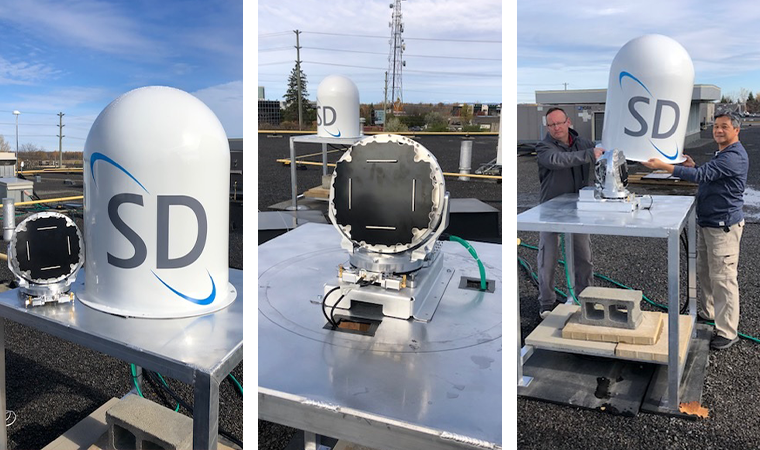 The two independent test streams have very different objectives which merge when they become integrated for inflight testing. In 2021, the SD Gulfstream G350 aircraft, and our new Dassault Falcon 2000, will be supporting the antenna’s final tests as the antennas connect, through all phases of flight, the full SD eco-system of hardware, software and satellite networks on board the two different platforms.

We’re also delighted that in parallel to our own testing, the line replaceable units (LRUs), the satcom modem (SMU) and advanced tail-mounted antenna (ATMA), will be undergoing official DO-160G qualification testing, in partnership with Gulfstream, in early 2021. The dual testing and qualification ensures that when the antennas come to market next year, they will be validated to facilitate best-in-class aircraft communications to meet a wide range of mission requirements.

As a Value-Added Manufacturer (VAM) and service provider (SP) for Iridium Certus, SD is also designing and manufacturing a Plane Simple terminal for compatibility with this exciting new network offering, while also providing the service direct to the business aviation community. The SD Certus Antenna, slated for release next year, is a fuselage mounted High Gain Antenna (HGA) that meets the stringent performance requirements specified by Iridium for the “Class H2 system” and will support the highest Certus data rates available.

Today marks a significant milestone in our Plane Simple™ Ku-band Antenna System development – the first aircraft installation! The two-LRU system is being installed today on our SD Gulfstream to begin inflight trials over the @INTELSAT FlexExec network.
#PlaneSimple #Innovation

“For the first time ever, we have clear visibility into what are often considered opaque operating costs.”

Learn more about how the MySky and SD Pro integration is helping our own flight department and how it can help yours here: https://news.satcomdirect.com/cwc-newsletter/feb-2021/why-mysky-sd-pro-integration-is-a-force-multiplier/

The Q1 Connecting with Customers (CwC) Newsletter is out! Visit the SD Newsroom to read about our latest activities and developments with our innovative hardware, software, and infrastructure solutions. https://news.satcomdirect.com/cwc-newsletter/feb-2021/a-letter-from-jim-jensen-4/

Two of our Plane Simple™ Satcom Antenna Systems will be debuting this year, bringing lower-cost high-speed connectivity options to a wider array of airframes. Read more about how the minimize invasiveness and reduce associated installation costs. https://www.ainonline.com/aviation-news/business-aviation/2021-02-15/satcom-direct-plane-simple-antennas-set-debut

Today marks a significant milestone in our Plane S

Thank you to all of our customers and partners for

Season’s Greetings from the team at SD!

Registration for CwC 2021 is now open! Join us fro

As we celebrate Thanksgiving in the U.S. today, we

With gratitude for your service and sacrifice, on

Have you had a chance to read our latest CwC Newsl

We are extremely proud to be ranked #1 for the 6th

Stay informed in the flight deck with automated al

In response to the ongoing COVID-19 pandemic, we a

Wishing you and yours a Happy New Year and best wi

We are making significant investments in our telep

We are extremely proud to be recognized by our val

Satcom DirectMarch 1, 2021 at 10:46pm
Today marks a significant milestone in our Plane Simple™ Ku-band Antenna System development – the first aircraft installation! The two-LRU system is being installed today on our own SD Gulfstream to begin inflight trials. The aerial testing phase will validate the terminal’s performance over the Intelsat FlexExec network. We take pride in testing our products and services internally before we offer them to our customers. Stay tuned for more updates as we work toward formal product introduction later this year!
#PlaneSimple #CustomersFirst #Innovation

"At SD we are focused on delivering trustworthy data via SD Pro to underpin decision making. With the integration of Polaris we are enabling shared, proactive risk mitigation which improves business aviation safety and continues to raise the standards of the sector."
https://news.satcomdirect.com/news/satcom-direct-and-polaris-aero-team-up-to-strengthen-flight-risk-assessment-for-business-aviation/

SD and Polaris Aero Team Up to Strengthen Flight Risk Assessment
Satcom Direct is teaming up with Polaris Aero to enhance the risk assessment and mitigation process for mutual SD and Polaris customers.
news.satcomdirect.com
10    View on Facebook

Satcom DirectFebruary 23, 2021 at 4:24pm
“For the first time ever, we have clear visibility into what are often considered opaque operating costs.”

The AI-powered spend management platform MySky has given our flight department the ability to maximize our budget by highlighting where we are spending effectively, and more importantly, where we are not. With integration into SD Pro, we are able to get a glimpse of our spend status without having to ever leave the SD Pro environment and can click into the MySky module to dive deeper as needed. Learn more about how MySky is helping our own flight department and how it can help yours here: https://news.satcomdirect.com/cwc-newsletter/feb-2021/why-mysky-sd-pro-integration-is-a-force-multiplier/

SD Flight Ops: Why MySky SD Pro integration is a Force Multiplier
As SD continually seeks to set new industry standards, we have been impressed by the AI-powered spend management platform MySky.
news.satcomdirect.com
9    View on Facebook